The Curious Case of the Cricket: Storytelling and Conflict Transformation in Ghana

Jasmine R. Linabary is a doctoral candidate in the Brian Lamb School of Communication at Purdue University and a research assistant with the Purdue Peace Project.

Arunima Krishna is a doctoral candidate in the Brian Lamb School of Communication at Purdue University and a research assistant with the Purdue Peace Project.

Stacey L. Connaughton (PhD, University of Texas at Austin) is an Associate Professor and Associate Head of the Brian Lamb School of Communication at Purdue University and Director of the Purdue Peace Project.

In a school room in Nandom, Ghana, a group of citizens sat together discussing the significance of a cricket.

Although a lowly cricket may not seem important in a context where disputes over land rights and ownership had resulted in the destruction of property and physical violence for decades, this moment was powerful. Opposing sides of ongoing land disputes worked together to make sense of the causes of conflict in the Conflict Family, which tells the tale of three animals whose peaceful coexistence was disrupted, unbeknownst to them by a malicious cricket, and who instead of talking to each other about the conflict chose to blame each other leading to their own destruction. Allegorical stories such as this are common explanatory tools in the Ghanaian context and among the Dagara people in Nandom specifically. In discussing the story, the participants reflected on the circumstances of their own conflict, their roles within it, and strategies for peace.

Collaborative storytelling activities like this were central to the Strategizing for Peace workshop held in Nandom with support from the Purdue Peace Project. PPP has been collaborating with local citizens in the Nandom District in northern Ghana since November 2013 to help resolve the several land disputes that have been plaguing the primarily agricultural community for years. It was upon the citizens’ invitation that this workshop was organized. Through this activity citizens were able to engage in productive dialogue and outline actions to address their ongoing land disputes and reduce the likelihood of political violence in the area.

Storytelling holds great potential for peacebuilding, allowing for sharing histories and values, making sense of complex issues, and opening up possibilities for action. Storytelling is an inherently participatory activity; even with a single speaker and an audience, storytelling involves a shared process of making sense of the story’s meaning. 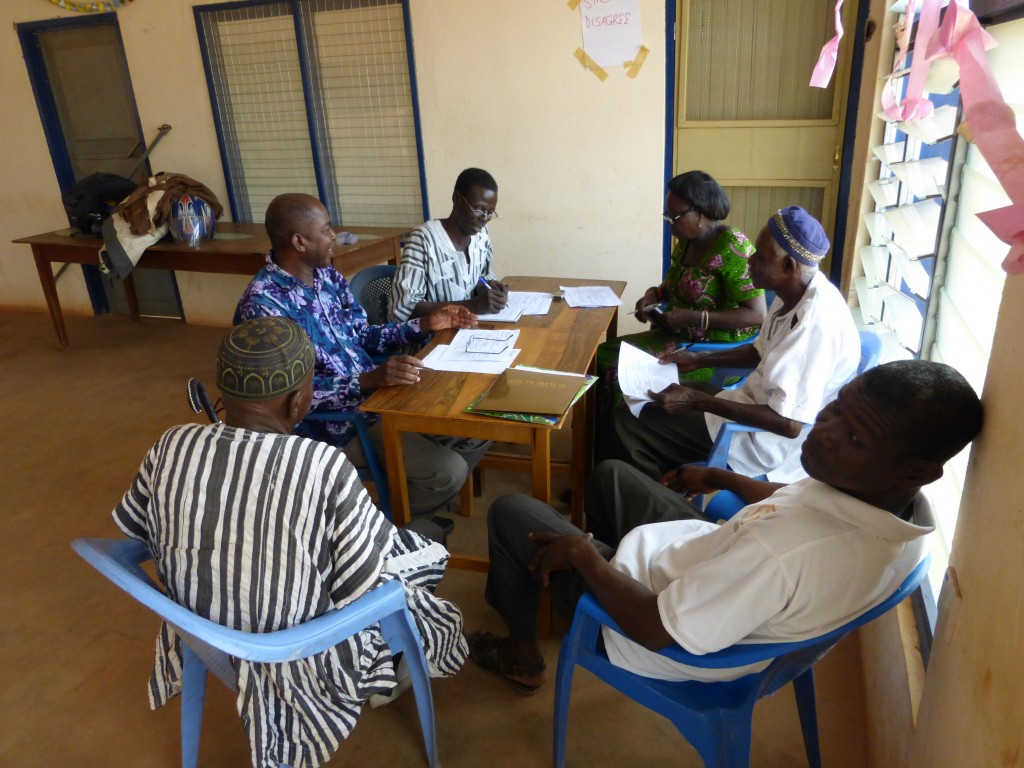 (Photo used with permission by the Purdue Peace Project)

One of storytelling’s greatest strengths is its transformative potential. The act of sharing one’s story or engaging in collective storytelling can be empowering. Furthermore, it generally requires little training or special equipment, and can be flexible and adaptable to the cultural context and situation.

Storytelling has long been used to diffuse tension, promote understanding, and inspire reconciliation. Personal and community storytelling has been part of peace and post-conflict processes in various contexts, including Jerusalem Stories for Israel and Palestine, and South Africa’s Truth and Reconciliation commissions.

Autobiographical accounts and histories are not the only stories that hold potential within peacebuilding. Cultural stories and storytelling practices within a particular context can also serve as a catalyst for dialogue and action.

Such was the case during the Strategizing for Peace workshop in Nandom. During the workshop local facilitators related the story of the Conflict Family, after which the participants were divided into four groups. Each group reflected on prepared questions like “How does the story relate to conflicts in your community?” and presented their responses to the larger group.

The story served as an impetus for critical reflection. As one participant noted: “I would say it was best in the sense that it was an eye-opener for all of us. It really made us to know that if there is something happening you need thorough investigation, thorough investigation before you can come out with the facts.”

The storytelling activity also encouraged open dialogue among the participants. The workshop consisted of chiefs, elders, women leaders, and others. Individuals were randomly assigned to groups, and as participants worked together to make sense of the story and how it applied to their own conflict situations, they were able to articulate a common goal. As one member stated, “We are here to be catalysts in our community to dialogue with our leaders to avoid the conflict in our communities.”

“Here, if you want people to understand, you use stories, proverbs. People will listen to you. Stories stick.”

The story became a tool through which people on different sides of a conflict could interact with each other, listen to and understand opposing viewpoints, and collectively identify solutions to their own conflicts. Indeed, the workshop resulted in action plans informed by discussions of the story, which a local peace committee then implemented to help prevent violence during the farming season. The workshop remains relevant to their lives to this day; committee members still refer to elements of the Conflict Family story in their conversations with each other.

Despite these positive outcomes, storytelling can, at the same time, be used destructively by excluding viewpoints and encouraging harmful stereotypes. Storytelling is also contextual. While this particular form of storytelling was effective in this region, others should consider what storytelling forms and practices are culturally and contextually relevant. Storytelling also requires participants who are prepared to listen to one another, and therefore may not be effective in conflict settings where people are unwilling to sit together.

Even with these caveats, storytelling has transformative potential particularly by contributing to dialogue and action. As one Ghanaian workshop facilitator noted, “[Storytelling] is the way of communicating. Here, if you want people to understand, you use stories, proverbs. People will listen to you. Stories stick. They’re so catchy. They find it difficult to forget. It’s a way of communicating that has an enduring impact.”