Conservation for Peace: Perspectives of Environmental Peacebuilders in Liberia and Timor-Leste

Janet Edmond directs Conservation International’s Peace and Development Partnerships Program. She will co-author “Men and Women as Conservation Partners in Conflict Settings” in Peace Review: A Journal of Social Justice, 27:1-6.

Environmental peacebuilding is an emerging field of practice that responds to the needs of the many remote, biodiverse communities around the world that struggle to prevent or mitigate conflicts over natural resources. Between 1950 and 2000, 118 of 146 conflicts (81 percent) took place wholly or partially within biodiversity hotspots. About 40 percent of violent interstate conflicts in 2009 were linked to natural resources (UNEP 2012). Conservation International (CI) is an international conservation organization dedicated to empowering societies to care for nature, global biodiversity, and the well-being of humanity in a responsible and sustainable manner. CI’s environmental peacebuilders engage with local communities and institutions to restore societal cohesion, conserve the environment, and protect dwindling natural resources—often in countries with weak governance, social divides, and ongoing insecurity and violence.

The stakes could not be higher for Liberia and Timor-Leste, two post-war countries. Liberia’s forests cover nearly 45 percent of the country and are a vital source of food, medicine, construction material, and energy for thousands of households. Meanwhile, in Timor-Leste, about ninety percent of Timorese depend on natural resources for their food, shelter and livelihoods. 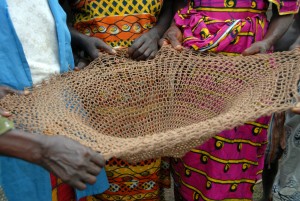 CI’s Conservation Stewards Program offers direct incentives to communities for conservation, including a negotiated benefits package in exchange for activities undertaken to protect natural resources. Eduard Niesten, a resource economist at CI, began working in Liberia in 2003. That year, the Accra Peace Agreement was signed, ending the country’s five-year civil war. Eduard remembers, “burnt-out cars lined the streets of Monrovia, bullet holes scarred many of its buildings and the wary U.N. peacekeepers manned checkpoints behind sandbags and barbed wire. This reinforced the sense that violence could flare up again at any time.” The active conflict is over but one of its root causes, access to natural resources, persists. When the majority of citizens depend directly on nature for their survival, there is an urgent need for sustainable resource management.

This is exemplified by the Liberian government’s process of establishing the East Nimba Nature Reserve, which they did with the goal of protecting thirty percent of the nation’s forests. Local communities were not consulted about the inception of the reserve, and felt that their access to forest resources–their source of survival and livelihoods–was cut off to meet the government’s needs. CI facilitated dialogue so that communities eventually negotiated an agreement with the local government and national Forest Development Agency to work with government authorities over a five-year period to manage the area as a strictly protected area.  Further, local communities received benefits packages which included: options for job training to convert hunters into “ecoguards” (park rangers), funding to establish household piggeries, technical support to improve rice production, and skills training for community health workers. This innovative conservation agreement model offered CI and communities a framework to work with government authorities on protecting forest resources.

During the 24-year Indonesian occupation, an estimated third of Timor-Leste’s population perished from fighting, disease and starvation. As a result, CI Timor-Leste Policy Manager Rui Pinto says that today “stepping on somebody else’s family tombstones is not seen as an offence but as the norm; since there isn’t enough land to hold so many graves, not stepping on one is impossible.”  This reveals the changes to cultural traditions and land as a result of the occupation. 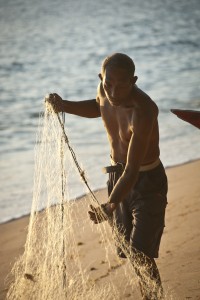 (Photo Credit: “Man with fishing net in Com, one of three coastal communities in Nino Konis Santana National Park where CI has had the opportunity to work. ” by Tory Read.) Used with permission, courtesy of World Wildlife Fund, Inc. ©

In the coastal communities of Nino Konis Santana National Park traditional gender roles and leadership structures had historically dictated ways in which women engage in natural resource management. The practice of gathering marine and coastal resources during low tide (gleaning) is one of the few activities that connect women and girls to the ocean. It also provides an opportunity for women to socialize away from the rest of the community. Therefore, when the men in the community suggested a temporary ban on gleaning, women felt that their rights had been revoked.

In 2008 CI became involved in the region to create a new co-management model for the park’s abundant natural resources. Using tools for participatory decision-making, communities came to a mediated solution incorporating both men’s and women’s perspectives. Community members and government agencies agreed to redefine their roles and responsibilities for using natural resources. A more inclusive environmental management regime was built by including gender dimensions in the process of establishing co-management arrangements. The regime was comprehensive and holistic in addressing the root causes of conflict.

Both Rui and Eduard engage community members in active discussions in order to identify local solutions to equitably and effectively manage the resources of legally-established national parks. They agree that peacebuilding is an ongoing process and does not end with agreements on equitable management of natural parks. For Eduard, it involves, “addressing questions about the relationship between government and people, community rights to land and resources and how money Liberia earns from its natural resources is distributed.” From Rui’s perspective the challenge lies in reconnecting the Timorese with the places they hold most sacred –the forest, the wilderness and the ocean–while building a “more positive collective view of the present.”

(Feature Photo Credit: “Searching for fish in Nino Konis Santana National Park, Timor-Leste, where the government is working to protect the reef which supports the livelihoods of thousands of people living on the coast.” by Matthew Abott) Used with permission, courtesy of © World Wildlife Fund, Inc.