Categories: Latest Insights | Author: Christopher Tuckwood | Tags: Africa, Monitoring & Evaluation, Technology & Innovation
Christopher is the co-founder and executive director of the Sentinel Project, a Toronto-based NGO dedicated to assisting communities threatened by mass atrocities through the use of technology and direct cooperation with the people in harm’s way. Follow him @ctuckwood

When citizens of a remote and violence-prone part of Kenya hear that a neighbouring ethnic group is planning a massacre, their first response is to believe it. This is especially true when such violence has happened before and when reliable local information is difficult to obtain; in this case, the price for skepticism appears higher than the price for erring on the side of caution.

Many factors have contributed to the violence—particularly land disputes and political maneuvering related to the country’s 2013 general election. A team from The Sentinel Project—a Canadian NGO dedicated to assisting communities threatened by mass atrocities—visited the Tana Delta after the killing ended and discovered that rumors had influenced conflict in the area. For example, reports that the local Orma (a predominantly cattle-herding nomadic people) community had obtained a large number of weapons with which to attack the local Pokomo (a people primarily of farmers), or that a Pokomo health worker had tried to poison rather than vaccinate Orma children, circulated in the area. These reports contributed to an atmosphere of fear, distrust, and hatred which was a catalyst for fierce violence. 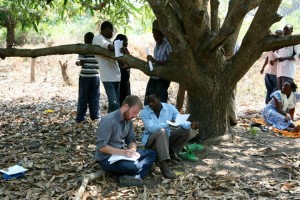 Christopher Tuckwood reviewing Una Hakika baseline survey with a respondent near the village of Kipini. (Photo Credit: by Adrian Gregorich)

In response to this situation, the Sentinel Project and iHub Research—a technology research centre based at Nairobi’s iHub technology incubator—partnered with the support of the International Development Research Centre to create Una Hakika (Swahili for “Are you sure?”), a mobile phone-based information service that monitors the spread of rumors and acts to check and contain them. Una Hakika subscribers can report rumors they hear through text messages, voice calls, or by talking to one of nearly 200 trained volunteer community ambassadors present in 16 villages. The Una Hakika staff include Kenyans from outside the Tana Delta who are perceived to be neutral in the local context. They are supported by international Sentinel Project team members and act to prioritize and verify each rumor before reporting back to subscribers in the village where it originated with neutral, accurate information.

In addition to obtaining information from subscribers and community ambassadors, the Una Hakika team has also established relationships with community leaders, religious leaders, local authorities, and other NGOs operating in the area. These other actors are asked to help verify rumors if they relate to their expertise—for example, consulting the Red Cross on rumors relating to natural disasters. Rumors relating to actual or impending violence are also prioritized and reported to local authorities so they can take action. In the long term, Una Hakika’s goal is not only to counter individual rumors on a day-to-day basis but also to encourage attitudinal change among Tana Delta residents, who will hopefully ask “Una hakika?” of themselves and others whenever they hear a rumor. 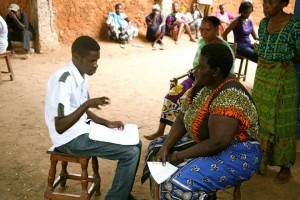 John Green Otunga, a member of the Una Hakika team, talks to a community member in the village of Tarasaa while collecting baseline data. (Photo Credit: by Adrian Gregorich )

Reducing the risk of violence in the Tana Delta depends on individuals and communities resisting rumors and building trust, but progress toward such a goal is inherently difficult to measure since attitudinal changes are not easily observed. Three different methods are overcoming this challenge and measuring Una Hakika’s effectiveness.

These methods were chosen in collaboration with the iHub Research team, which has extensive experience gathering such data in the Kenyan context. In addition to the challenges inherent to such qualitative data gathering, the local conditions of the Tana Delta limit many options for measurement, especially the low levels of literacy and education in the area and reliance predominantly on basic mobile phones. The three methods chosen below were deemed most appropriate in this context.

Admittedly, the largely qualitative nature of Una Hakika’s objectives makes evaluation challenging, but together these methods represent the best approach that the Una Hakika team has available to measure the effectiveness of the project. Over time, the objectives will be refined as new lessons are learned from both within and outside the Tana Delta.

Readers familiar with similar projects are encouraged to comment and share suggestions on how the Una Hakika team might work more effectively to measure the project’s impact. Now that the current incarnation of Una Hakika has demonstrated value and is continuously improving, the next step is to extend its life in the Tana Delta through the next Kenyan general election in 2017 as elections typically trigger violence in the country. At the same time, demand is growing for expansion to other areas, and the geographical scope of Una Hakika is scaled up to monitor more parts of Kenya with similar problems to those seen in the Tana Delta. Ultimately, the project will generate knowledge which can be used to manage misinformation in a variety of developing country contexts and support not only violence prevention but also governance, development, and public health efforts.

Conducting a community meeting known as a baraza as well as Una Hakika baseline survey in the village of Golbanti-Watta. (Feature Photo Credit: by Adrian Gregorich)