The Answer to Ebola: a Funder Makes the Case for Community-Driven Action

Categories: Latest Insights | Author: Libby Hoffman | Tags: Africa, Health, Local Peacebuilding
Libby Hoffman is the founder and President of US-based foundation Catalyst for Peace, the founding and long-term funding and program partner of Fambul Tok International – Sierra Leone. She produced the multiple-award-winning documentary film, Fambul Tok, and is a lead author of the companion book of the same name.

The answers are there.

This is a critical lesson of the post-war experience in Sierra Leone—that communities already have within them the resources they need to heal from the wounds of war. When Fambul Tok, the nationwide, community-owned and -led reconciliation program, provided the ordinary citizens of Sierra Leone the space and the support to lead in their own recovery, war-torn and divided communities accomplished powerful, sustainable reconciliation and are now leading their own socio-economic recovery. This way of working brought the world a new model for postwar healing. 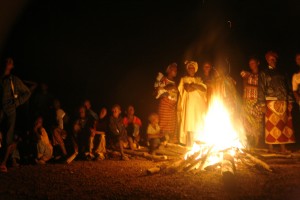 This lesson of the value and power of local agency is equally significant for the international response to the current Ebola crisis in Sierra Leone. The virus is still spreading, claiming 25 lives a day in Sierra Leone as of the end of December. Yet even for Ebola response, the answers are there.

Ebola is not just a medical problem—it is a community problem, and this dimension is being largely ignored within the current international response. Aid has focused predominantly on treating, and developing the capacity to treat, the virus—not on building meaningful communication channels with the communities it is ravaging.

Yet lack of trust within communities is the unseen but powerful inhibiter of Ebola prevention and treatment initiatives. Donated sanitation supplies are rejected as suspect if they are delivered by an unknown outsider, for example. Or when the friends and family of Ebola victims go into hiding out of fear, the contact tracers (healthcare representatives tasked with seeking out those who have come into contact with a disease) from outside the community are either unable to reach them or unable to counter the popular mistrust of health workers’ motives and intent.

Conversely, empowered and trusted local voices and leadership magnify the success of prevention efforts, and they do so while strengthening community capacity for post-Ebola recovery. By focusing national and international attention and resources on giving agency to communities, we can more effectively stop the spread of the virus and help create a social infrastructure that supports sustainable recovery after the crisis. This becomes, in essence, social immunity, leaving communities (and therefore the country) stronger to face the next crisis, whatever it may be. 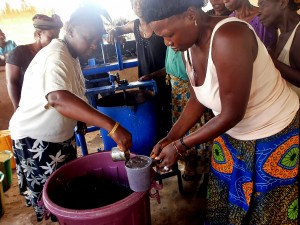 Working this way requires outside aid to focus on the local and the long term. Fambul Tok illustrates the potential this approach unleashes. In contrast to top-down, or outside-in models of internationally supported postwar justice (where the genesis of the concept is external to the culture and/or the locus of leadership is at the national or even international level, as exemplified by the Special Court and the Truth and Reconciliation Commission), which barely touched the lives of the majority of people most impacted by the civil war in Sierra Leone, Fambul Tok’s model works from the inside-out. Emerging directly from the cultural context of Sierra Leone, it puts the people and communities most impacted by the war at the center and at the helm, and it commits to developing their leadership over the long term.

The result? Its program of locally-owned and -led reconciliation has provided space for tens of thousands of people to reconcile directly with those who hurt them or whom they hurt in the war. These reconciliation efforts have nurtured a vibrant network of almost 2,500 villages with robust, inclusive local leadership currently leading economic development initiatives for their communities and advocating for themselves in political arenas. This is a vastly different long-term legacy than rusty NGO signs littering the landscape!

This ‘inside-out’ approach holds great promise for effective Ebola response, as Fambul Tok’s newly-empowered community leaders are showing us today. The Fambul Tok ‘Peace Mothers’ of Pujehun district came together after their village reconciliation ceremonies to make soap to raise money in support of their children’s education. As the national Ebola crisis deepened and soap for proper hand washing become a more essential—and increasingly scarce—commodity, they stepped up their soap-making initiatives to support national efforts to halt the spread of the disease. With coordination from the national Fambul Tok organization, Peace Mothers in other districts are distributing this soap in their communities while educating their friends and neighbors about proper prevention techniques. They are trusted members of their communities; their messages are heard and heeded.

We must hear them, too. Long-term and local works. 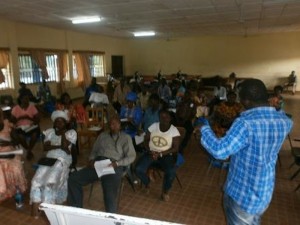 This ‘inside-out’ example models a self-reinforcing, positive loop—long-term work creates and holds the space for local leadership, which leads to economically-empowered women (and men); who then take the lead in working to address a community/national crisis; which brings tools for Ebola prevention in a way that communities trust and accept; using a process which further empowers local women and men as civic leaders, who are now further prepared and committed to lead in improving their communities into the future.

Civil society across Sierra Leone is rising to the challenge of applying an inside-out model to Ebola response. A group of trusted national, regional and community-based civil society organizations has come together, with Fambul Tok taking the lead, to bridge national and international public health actors with local leaders.  The Bridging Communities Network (BCN), as it is called, is already making an impact. Nationwide district-level consultations are bringing community voices to the district Ebola response teams for the first time, identifying and illuminating gaps or areas that need improvement. This network of national nongovernmental organizations and community-based organizations represents formidable social capital and an important platform for citizen action groups to collaborate with the National Ebola Response Centres (NERC) at national and district levels.

Let’s hope that national and international actors see the importance of that bridge and strengthen and utilize it for more effective Ebola response. Let’s hope it is kept as a strong and supportive structure connecting the nation’s ongoing work for individual and community health, even beyond the current crisis.

The answers are there. By embracing the capacity of local communities, with a long-term commitment, the legacy of the current Ebola crisis can be a network of vibrant, healthy, whole communities, more able to advocate for their needs, facilitate their local development efforts, and use outside resources wisely for the benefit of their citizens.  Much better than a rusty sign any day.

Learn more about Fambul Tok, including its community-led Ebola response efforts, at www.FambulTok.org.

Watch the award-winning documentary film about Fambul Tok at www.FambulTok.com.