Communication and Engagement in Peacebuilding

In the locality of Kebkabiya, North Darfur, some 150 kilometers west of Sudan’s capital city of El Fasher, the Sudanese Development Initiative (SUDIA) is using low-tech solutions to build peace by improving communication flows to improve livelihoods.

“The most important problems we face here are a lack of security and problems between the Beni Hussein and Rizeigat tribes,” says Yasin Hussein Abbakr. Yasin, formerly a farmer in the small village of Gurra Farjawiya, was displaced to the town of Kebkabiya and is now a proud member of SUDIA’s Community Communications System (CCS). Through CCS, Yasin and other community members from ten Kebkabiya settlements have received training to help them become better ambassadors for peace. Impressively, Yasin and his new colleagues decided to immediately implement those skills in a purely community-led project born of a strong desire to end old tribal rivalries. Already, some stolen livestock has been recovered and some intertribal negotiations have been launched. The negotiations, Yasin says, are the most important achievement. 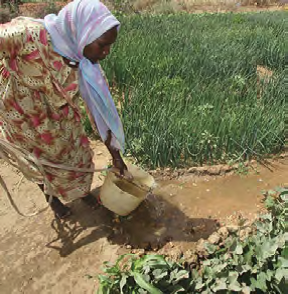 In Kebkabiya, engagement and communication are particularly salient concerns. Traditionally sustained by agriculture and livestock trade, Kebkabiya hit the spotlight in 2012 when gold was discovered in nearby Jebel Amer. The discovery brought an influx of outsiders and, with them, an upswing in violence as already scarce resources were stretched to the breaking point. But even before the discovery of gold, competition over land had increased in the wake of desertification and a history of heavy conflict in the region, both factors which have made peaceful co-existence challenging to maintain. Given proliferation of arms, disputes over land and resources have become increasingly violent. In addition, conventional communication channels are limited and unreliable. Locals depend on community leaders, mobile phones, and radio to receive what information they can, but the flow is erratic.

Good communication improves not only relationships within and among communities, but also has a positive impact on livelihoods. For example, by providing information about shortages, market prices, harvest progress, disputes, and peace activity, community members are able to make more informed day-to-day decisions. The CCS uses text messaging to communicate with sources—selected from both genders and all ages and local tribes—in the ten-village cluster. Sources are requested to send at least two messages weekly on issues pertinent to community life. In return, they receive a weekly and monthly summary of all CCS messages which they are encouraged to share and discuss.

Thirty-four-year-old Saliha Younis Mohammed from the village of Edded Al-Nas used to get most of her news from her younger brothers or by chatting with the neighbors. If the network was good, she would call friends in other villages, but coverage is patchy, so she was often unaware of what was happening outside her village. The presence of armed militias on the roads means that traveling between villages is dangerous, making it difficult to spread vital security information any other way.

Saliha is responsible for her younger siblings. “Being a part of the CCS means I am better informed and can make better decisions for my family,” Saliha explains. “When I learn from the CCS that the well in a nearby village is damaged, I know not to send my sisters to collect water there.”

Saifeddin Mohammed Abbakar was displaced from his farm and lost his income. He uses CSS information to inform his friends of market prices in various areas so they can choose the best place to sell their goods and help more food reach areas affected by shortages. Being part of the CCS gives Saifeddin the opportunity to have a valuable impact on his community, contributing to others even as he rebuilds his own life.

For SUDIA, this enthusiasm is an important reminder that building peace is not a top-down process. There can be no peace without community engagement.