Bosnia and Herzegovina is not in a “post”-conflict situation, it is in a post-war situation. The war is over but the conflict continues. The status of Bosnia can best be described as “negative peace.” Other countries that might fall under the same status include Kosovo, Cyprus, Kashmir, North Korea, Burma, Guatemala, and Zimbabwe.

In the cases of pre-civil war Syria and Libya, national authorities held civil disorder and violence in check by internal enforcement of negative peace measures. The former East Germany and earlier Argentina and Chile likewise constitute classic examples of negative peace. The principle distinction here is between internal (state) and external (international intervention) suppression of war or violent civil disorder.

My perspective derives from my Bosnia field research, which led me to develop a framework and model for assessing stabilization operation environments. Uniquely, the assessment examines the environments in (1) structural and relational terms and (2) negative and positive peace terms. For this purpose, I adapted and departed from Johan Galtung’s principles of negative and positive peace but utilize his model of structural and cultural violence as is. 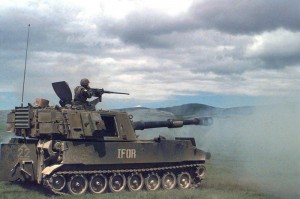 International stabilization interventions usually achieve a negative peace status, which involves the negotiation of a political settlement and cessation or suppression of overt hostilities. However, despite intense diplomatic and reconstruction efforts, negotiations often stall without creating positive peace, as the conflict-party’s negative sentiments (which precipitated the conflict requiring the intervention in the first place) are still present and remain largely unchanged. As a result, fundamental causes and conditions underlying the conflict remain inadequately addressed. My adapted version of positive peace is, in essence, a condition in which such underlying root causes and conditions, and structural and cultural violence, are being effectively addressed by local positive peace-oriented mechanisms, and stabilization assistance by outsiders is no longer needed.

Since the implementation of the Dayton Accords the reconstruction of national and local governments, social welfare institutions, and the economic sector has long been accomplished. Little progress, however, has been made in the normalization of relations between the conflict-parties, as in the continued practice of pervasive employment discrimination. 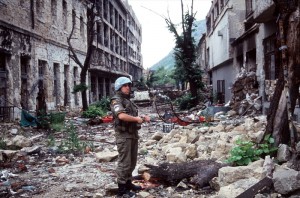 UN peacekeeper from Spanish contingent stands amid rubble in Mostar, Bosnia and Herzegovina during the Bosnian-Croat war of 1992-1994. (Flickr.)

According to diplomats I interviewed in Bosnia the current highly dysfunctional and discriminatory ethno-political constitution and governmental structure, as instituted by the Dayton Accords to stop the war, was assumed at the time to be transitional by the original international negotiators. However, it was not officially designated as such due to a compromise with Serbian hardliners who preferred the Dayton-sanctioned post-war territorial status quo and segregated political arrangements. Therefore, no plan or timeline was set in place to officially facilitate a transitional process to a viable non-ethnic based constitution and governance structure. The Dayton ethno-political constitution defaulted to expedited fear-based ethno-political elections that only served to entrench hardline obstructionists in power and institutionalize structural violence. I believe that these two factors are the most fundamental flaws in the Bosnia stabilization and state-building exercise.

The current situation in Bosnia can, I think, be safely described as extant negative peace. Structural and cultural violence are endemic. Re-ignition of open hostilities (direct violence) appears to be largely held in check by the proactive presence of in-country trip-wire international political, civil, and military advisers under the European Union umbrella, and a hope of eventual inclusion in the EU. In fact, the relative progress and cautious optimism that was generally expressed by Bosnians and internationals from 2004 to 2008 appears to be moving in reverse.

Negative peace, although sometimes necessary to stop a war or to mitigate violence, inevitably erupts into renewed war or violent disorder unless methodically transitioned to a positive peace orientation. This fact alone does not forebode well for Bosnia, Euro-NATO circumstances, or neighboring regions. Something has to give, and sooner or later it will.

The pressing problem now is what to do when a political settlement—and stabilization and reconstruction as we know it, all essentially accomplished in Bosnia—are not enough to break a deep-rooted protracted conflict cycle. As one interviewee told me, “A mistaken assumption is that Dayton was a reconciliation process. “

Fundamentally then, sustainable peace—of the positive kind—is the ultimate challenge and desired end-state, and the future of conflict discussion.