Categories: Latest Insights | Author: Kristin Williams | Tags: Atrocities & Conflict Prevention, Civil Society, Democracy & Governance, Education & Training, Mediation & Negotiation, Peace & Conflict Resolution, Resilience, Security, Stabilization, Women & Gender
Kristin Williams is Writer and Program Associate at The Institute for Inclusive Security, where she strengthens women’s leadership in the Middle East and North Africa and makes the case globally for women’s substantive participation in the peace and security decisions that affect their lives. She currently serves on the Editorial Board of Building Peace: A Forum for Peace and Security in the 21st Century.

Why is the inclusion of women in decision-making around peace and security issues so important? Here are the cold, hard facts:

• The single best predictor of a state’s level of peacefulness is not wealth, democracy, or identity; it is how well its women are treated.[1]

• Women represent only 4% of signatories of major peace accords in the last 20 years.[2] In that same time period, one-third of all countries that signed peace agreements returned to violence within five years.[3]

• Broadened peace processes, ones that are inclusive and representative of different sectors of society, are 64% less likely to fail than those that include only armed actors and political parties.[4] 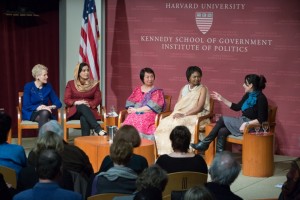 The statistics are compelling, but they don’t tell the full story. The real answer lies in the trailblazers Inclusive Security works with all over the world, who prove daily that women are an astonishingly underutilized, and extremely powerful, force for peace.

Last month, for the 15th year in a row, Inclusive Security convened a small group of women leaders—this year from Afghanistan, Colombia, The Philippines, Rwanda, and Syria—for a week of candid discussions, training sessions, public events, and small-group interactions. No facts or figures compare to hearing first-hand about their motivations, triumphs, and challenges.

Bringing these women together gave them space to reflect on their peacebuilding journeys. What is it that leads them to work every day for a more secure world?

For some, it was a moment where they witnessed firsthand the effects of violence and exclusion, and how women are coping with them. Camila Medina Arbelaez, who documents the testimonies of Colombians affected by the long paramilitary conflict for the Historical Memory Center, grew up in a city where people were indifferent to the privation and insecurity of rural areas. While conducting research in remote villages, she discovered that “violence is not natural; it is a social process. It’s not just a matter of bullets…[it also means] regulating people’s bodies, space, time, relations.” Caught between multiple armed actors, she said, “women make a daily revolution” to protect their children, homes, and land. This revelation inspired her ongoing work for peace and women’s equality in Colombia. 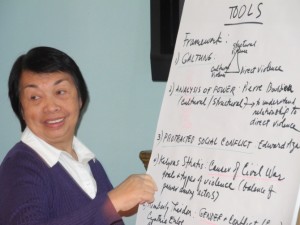 “Changing the paradigm of the world”

Women leaders, particularly in conservative communities and countries, frequently have multiple forces organized against them. Their work is sometimes solitary, and often dangerous. The solidarity they experience when connecting with women facing similar challenges is invaluable.

Syrian activists, for instance, are currently navigating a treacherous path toward democracy in their country. Hearing from the Rwandan participants, who are marking 20 years since they rebuilt their society in the aftermath of genocide, the Syrian women were humbled and inspired. Honey Al Sayed, a radio host and producer who fled Syria in 2012, asked Rose Kabuye, a former Rwandan freedom fighter, about the apathy of the international community: “Are they going to forget about us like they forgot about you? Are they going to wait until a million people die? What did you do?” In response, Rose offered a valuable lesson and, given the incredible recovery her country has made, a ray of hope: “We did it for ourselves. We didn’t wait for the international community.” 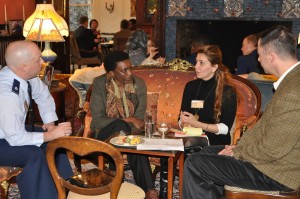 The learning extended not just across countries at different stages of conflict and reconstruction, but also between generations, sectors, religions, and other, less tangible, boundaries. The common thread was women’s ability to—as Afra Jalabi of Syria put it—“change the paradigm of the world.” Women are united in the goal of developing a new understanding of what peace and security looks like: not just the absence of war, but dignity and equality for all.

“Power is the potency to act for what is good”

These lessons are not theoretical for the women leaders Inclusive Security works with. Upon returning home, Mariam Jalabi, of the Syrian National Coalition, spent the next two weeks lobbying successfully for women to be added to the opposition’s negotiating team in Geneva. The same week, the female lead negotiator for the government of The Philippines, Miriam Coronel Ferrer, signed a historic accord that ended a 40-year-old insurgency. Afghan women mobilized their collective power to lobby against a new law that will prohibit women from testifying against relatives who abuse them. A group of South Sudanese and Sudanese women coordinated by Inclusive Security delivered recommendations to senior mediators of the crisis in South Sudan, calling for a ceasefire monitoring mechanism, safe passage for humanitarian aid, and a negotiations structure that meaningfully includes women and civil society.

The ever-sage Irene Santiago told us many times throughout the week that “power is the potency to act for what is good.” If that’s true, then these women are the most powerful people I know.

Dr. Valerie M. Hudson (below) will be featured in Issue 3 of Building Peace.