Why Peace Depends on Women

Categories: Features | Author: Dewi Suralaga | Tags: Middle-East, Peace & Conflict Resolution, Security, South America, Women & Gender | Publication: 3
Dewi Suralaga is policy advisor for women and peace and security at Cordaid, one of the largest development organizations in the Netherlands. Together with more than 600 local partners Cordaid has been fighting poverty and exclusion in the most fragile conflict areas in the world for over a century.

One-quarter of the world’s population—1.5 billion people—live in societies affected by war, where fundamental human needs go unsatisfied and communities are divided and insecure. The lives of women and children are most deeply affected: According to UN Women, the number of women affected by conflict-related rape and sexual violence, forced displacement, and abduction far exceeds that of men. In the absence of men—drawn away or perished in fighting—women often have sole responsibility for taking care of their families financially, even as discrimination and violence against women and girls influence their economic and political opportunities, their mobility, their personal health, their ability to get an education, their families, their communities, and, ultimately, their country.

The background paper for the 2013 global technical review of UN Security Council resolutions on women, peace, and security coordinated by UN Women states that levels of gender equality and women’s security in society are firmly correlated to indicators of national health, economic growth, corruption, and social welfare. During and after a conflict, women have an immediate understanding of the many implications of violence and must be involved in peacebuilding processes to identify what needs to be done to establish greater security for themselves, their families, and their communities. This security is not only about ending the shooting but also about raising the quality of daily life, reducing day-to-day violence and fear, strengthening justice for women, and improving relations within communities. Addressing women’s needs and priorities and protecting them from violence can therefore strengthen peacebuilding processes, socially, economically, and politically.

“Based on 100 years of experience it is our conviction that there is no such thing as ‘peace’ when women are not on board. There is no excuse for not having women on the negotiation table. This lesson should be implemented in current crises like in Syria, South Sudan, or the Central African Republic,” states Simone Filippini, Cordaid’s executive director.

Developing a Barometer for Security in Women’s Lives
According to UN Women, in the major peace agreements signed between 1992 and 2010, only 2.5 percent of signatories were women. Peacebuilding processes rarely include women’s priorities, which in turn significantly undermines the prospect of sustainable peace in many countries. Cordaid, one of the largest development organizations in the Netherlands, is working with a collective of local women’s groups in Afghanistan, Colombia, the Democratic Republic of the Congo, and other countries to strengthen local women’s capacities to improve the collection of information about the insecurity women face in their communities. In this initiative, called “the barometer of local women’s security,” local women themselves document and monitor the security situation from their own perspectives.

The barometer process has quickly revealed that women’s perceptions of security are drastically different and far broader than traditional paradigms of state security. For example, local women identified three priorities for regular monitoring: effects of militarization and armed conflict; access to justice and legal services for women who are victims of violence; and access to rights and entitlements, such as property rights—particularly for the most vulnerable women, such as those widowed by conflict. Using a series of indicators or conditions under each theme, local women not only are generating the evidence needed to raise awareness about their concerns and lobby for change but also are breaking the isolation of vulnerable women and giving them a voice. The barometer connects women, raising their collective awareness and, therefore, their collective power to take action to address their concerns about security in their communities. They are using information to connect and empower themselves and promote security through their eyes and their lives.

Afghanistan: Unveiling Women’s Security Issues
The government of Afghanistan is working on a peace deal with the Taliban and other insurgent groups, but Afghan women’s groups are concerned that the deal will compromise the gains in women’s rights in the past decade. High-profile international pressure, along with tireless lobbying from the Afghan women’s movement, however, has resulted in the inclusion of women in the peace process. This is a significant victory, as the majority of Afghan women still have difficulties leaving their homes without being accompanied by their husbands or a male relative, and around 80 percent of women are illiterate and affected by gender-based violence.

The 2010 Loya Peace Jirga, in which 1,500 delegates from all walks of life in Afghanistan participated, included 160 women. In another step forward for women in the public domain in the country, nine women were elected to be among the sixty-one members of the High Peace Council, which operates under the Afghanistan Peace and Reintegration Program. Afghan women’s key demands are loud and clear: Any peace negotiations must address the root causes of conflicts and secure the rights and gains of women. In February 2014, the Women’s Committee within the Afghan High Peace Council issued a petition for people to sign on to their call: “To end the current bloodshed and establish nationwide peace and unity, we call on the government, armed opposition groups and the international community to participate in peace talks and urge the conflicting parties to declare a cease-fire and to reach peace.”

The Afghan Women’s Network (AWN), a coalition of 112 nongovernmental organizations (NGOs) and 5,000 individuals, has led the way in supporting women’s participation in the official peace process, along with grassroots peace initiatives. AWN’s effectiveness in national and international policy arenas is built on the legitimacy and credibility of its membership and extensive processes of local consultation.

Colombia: Breaking the Glass Ceiling
The government of Colombia and the Revolutionary Armed Forces of Colombia (FARC) are negotiating a peace deal to resolve four decades of armed conflict in the country. The prolonged conflict has disproportionately affected women and girls: 76 percent of the 1,497 assassinated indigenous persons were women; the number of women’s rights defenders assassinated increased by 200 percent between 2009 and 2010; and 80 percent of the 4,744,046 people displaced are women and children. The National Women’s Network (Red Nacional de Mujeres) in Colombia has so far organized eighteen regional and three national forums to discuss the peacebuilding process in their country, and in 2013 the persistent efforts of the women’s organizations yielded positive results. In October 2013, six women’s networks organized the Women’s Peace Summit and submitted recommendations to the peace negotiators. In November 2013, the assembly reached its first agreement regarding political participation and includes a statement that “everything about the extent of political participation including its implementation was carried out taking into account a gender perspective and ensuring the participation of women.” In response to the continued pressure from the women’s movement in the country, in the same month, the president appointed two women as the first female chief negotiators to join the Colombian government’s negotiating team with the FARC. The effect of these appointments remains to be seen, but they offer the promise of women’s perspectives and approaches being taken into account as the country continues its progress toward peace.

In the meantime, the women’s movement is already looking ahead and preparing its position for the postconflict period. Women continue to consult widely on complex issues such as land distribution and the demobilized guerrilla. They debate the most productive steps toward reconciliation, including whether ex-combatants should be permitted to settle back in their communities or be prosecuted. The opposing groups are part of the same communities, but how will women feel to have to live alongside the very people who raped them and killed their husbands? The women fully realize that until those issues are properly resolved, the wounds will remain open and become a fertile ground for new conflict. 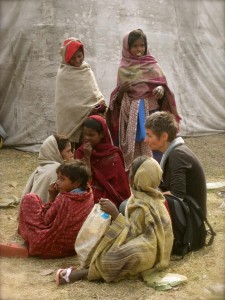 From the Vision of Humanity photo competition, “What Does Peace Look Like to You?”
Source: Enver Rahmanov

The Future of Resolution 1325
Implementing the obligations of the UN Security Council Resolution 1325 in ways that create political and cultural shifts in promoting women’s actual participation in peacebuilding remains a challenge. Three main conditions need to be addressed to realize the commitments made in Resolution 1325 and related resolutions.

First, the concept of security used to frame problems related to conflict and violence needs to center on people rather than the state. Interventions of the United Nations and donor countries usually pay lip service to the importance of human security and then continue to focus on issues that may not serve the best interest of the people, such as providing technical training to security forces without fundamentally reforming them or taking care of women as victims of violence instead of involving them in resolving it.

Second, the commitments made in Resolution 1325 and related resolutions need to be measured and reviewed within a stronger accountability framework. National action plans to implement Resolution 1325 are uneven and flimsy in many parts of the world. Civil society can contribute to establishing standards and developing monitoring processes, such as the barometer initiative to measure local women’s security. The contribution is even more relevant now because since October 2013 state signatories have been obliged to report their implementation of Resolution 1325.

Finally, sustainable peace will remain elusive unless all citizens of a country—men and women—have the same opportunities to exercise their political, economic, and social rights. This has been said many times, but it continues to be a daily problem in many conflict-affected areas. Full and meaningful community participation, including women leaders and networks, is essential to ensure more equal gender relations and the inclusion of all views on how to build and sustain peace.