Three Myths about Women in Peacekeeping

When we ask about the presence of women in peacekeeping operations, we might as well be asking to see a fantastical creature, like the mythological female warrior Lady Triệu Thị Trinh, a nine-foot-tall Vietnamese woman who rode into battle against the Chinese in the third century AD upon a massive elephant.[1] Today’s rarified creature—a female soldier or police officer in peacekeeping—is present in less than 4 percent of UN peacekeeping operations globally. The most recent statistics show that women account for about 2 percent of personnel in UN military components and about 9.8 percent of the UN police force. Still, women face myths that hinder gender equality in peacekeeping. Here are three myths we can do without.

Myth 1: It’s All About Women

Peacekeeping operations are intended to stabilize post-conflict situations and monitor the enforcement of peace agreements. In order to accomplish this, it is vital that they effectively provide security for the whole population. Including more female peacekeepers and a gender perspective increases a peacekeeping mission’s ability to meet its mandate. A gender perspective is an analytic tool that illuminates the different experiences of men, women, boys, and girls as they relate to a mission’s mandate. Both men and women can use a gender perspective in their work. Multiple studies by the North Atlantic Treaty Organization (NATO) and United Nations show that a gender perspective improves the operational effectiveness of missions in three key ways: It enhances the situational awareness of a mission, increases credibility and confidence in the mission, and helps to address defensive measures.

Attention to both men’s and women’s distinct experiences in conflicts reveals comprehensive information on the area of operation, including the identities of local power brokers, access to resources, and community security threats, risks, and needs. Such thorough information gathering about the effect of a peacekeeping operation on the local population can improve a mission’s capacity to accomplish its goals. As Brigadier Karl Engelbrektson, force commander of the Nordic Battlegroup for the Swedish Genderforce, has remarked, “Understanding the role of women is important when building stability in an area… If women are the daily bread winners and provide food and water for their families, patrolling the areas where women work will increase security and allow them to continue [to work]. This is a tactical assessment… Creating conditions for a functioning everyday life is vital from a security perspective. It provides the basis for stability.”

Myth 2: An Equal Number of Female and Male Soldiers in Peace Operations Means We Have Achieved Gender Equality

Historically, whenever women have been integrated into male-dominated environ- ments, whether in government or in military institutions, they have met with obstacles, derision, and bluster. Lieutenant General Claes-Goran Fant relates an anecdote from Sweden’s past that illustrates this point: “In the beginning of the last century an aggressive and loud debate arose regarding women being given the possibility of work in the governmental sector. The argument was that the wrists of women were too weak to write through several layers of carbon paper.” Peacekeeping is no exception. Even with increasing numbers of women in peacekeeping forces, the prevalence of social norms and behaviors that perpetuate inequality between men and women can hinder women’s full participation in the peacebuilding process. The solution is to involve more men, not just women, to promote gender equality in peacekeeping.

Men, especially male military and political leaders who are key decision makers and norm setters, need to be fully engaged in the effort to increase women’s participation in peacekeeping and in integrating a gender perspective into peacekeeping missions. Without large numbers of women in military components of missions, it makes sense to engage men in strides toward gender equality. In 2009, the UNMIL/Liberia Office of the Gender Advisor and the Office of the Force Commander appointed a male military gender officer under direct supervision of the force commander. In addition, UN guidelines call for the appointment of gender military advisors to peacekeeping missions. South Africa, Sweden, Norway, and Ireland already have military gender advisors in their national forces. These advisors may be male or female officers and are a crucial addition to the chain of command of an operation because they are trained in both the language of military components of peace operations and gender equality goals. 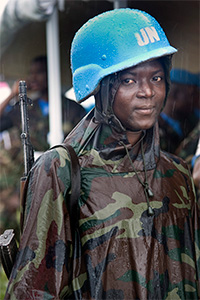 Not surprisingly, field studies have shown that teams comprising male and female soldiers outperform female-only teams. According to a 2009 study by the Swedish Defense Research Agency on operational effectiveness and the implementation of UN Security Council Resolution 1325 in Afghanistan, mixed teams were more effective in gathering information, were viewed as more credible, and provided enhanced force protection because they could speak to men, women, boys, and girls in the population, resulting in a more nuanced understanding of their area of operation. Lieutenant Commander Ella van den Heuvel, former gender advisor at International Security Assistance Force Joint Command, pointed out in a 2011 interview that “from a practical point of view. . . if you have four military women in your detachment, you can form one female engagement team (a women-only team), but you can form four mixed teams if you don’t use female-only teams. And what do you think is more effective—patrolling an area with one female-only team where you engage with only women or patrolling in four areas where you can engage with women, men, boys and girls?”

A 2013 study by this author, Not Just a Numbers Game: Increasing Women’s Participation in Peacekeeping, found that men in high-level UN positions cited specific examples of how a gender perspective made their work in the field more effective. However, these men do not collaborate with each other to promote gender equality in peacekeeping missions. This is a missed opportunity.

The presence of UN peacekeepers has been linked to sharp increases in sexual exploitation and abuse in Cambodia, Somalia, the Democratic Republic of the Congo, and the Balkans.[2] Because of this, most assume that the primary aim of including women in peacekeeping operations is to address sexual violence. This is a very limited understanding of the women, peace, and security mandate. In fact, UN Security Council Resolution 1325 calls for the inclusion of women as well as a gender perspective in peace operations to address a range of human security problems in conflict.

A mission that provides training for a local community on evacuation processes for disaster and conflict situations should include both men and women for protection and prevention purposes. When war breaks out, men usually join the fighting or flee, and women are left to take care of the elderly, the children, the sick, and themselves. Training women on evacuation processes ahead of time serves the aims of both protection and prevention. It is important to make such training available to the entire community, especially where the peace- keeping mission does not have a direct mandate to protect civilians. Excluding a gender perspective from such security problems wastes precious time and effort, ultimately disadvantaging local populations.

To be truly effective and fulfill mission mandates, men and women in peace operations need to be trained to understand how conflict affects women, men, boys, and girls differently and what the different security realities are for every part of the population. It is not solely about women or about sex: The goal of gender equality in peacekeeping is to improve the effectiveness of a mission to deescalate violence, increase protection, and serve the entire conflict-affected population to create sustainable peace.