It’s Time to Change the Narrative on Women and Security

Johanna Mendelson Forman is a Scholar-in-Residence at American University, School of International Service.

This year, the United Nations declared “inspiring change” as the theme of its activities for International Women’s Day (March 8) in order to commemorate the evolving role of women globally.  It is especially appropriate since it is time to change the narrative that emphasizes women as victims and passive actors in their communities. 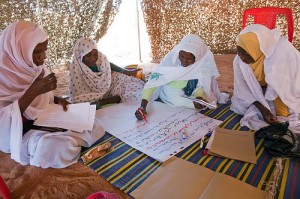 With the attention focused on the protection of women in conflict, specifically from gender-based violence that remains prevalent in many parts of the globe, it is often easy to overlook the on-the-ground realities that women in war zones face daily. Security Council resolutions make it appear that victimhood is the issue.  Aside from the landmark declaration of the UN Security Council Resolution 1325 in October 2000, which brought attention to the salience of having women at the peace table and in conflict prevention, the focus of this and other non-binding resolutions reflect a strategic blindness about how women actively participate in any society.

Women are not only consumers of security; they are providers of security.  If we take a gender lens to the issue of building security in a community that has suffered a war, or is rebuilding after conflict, women must be considered among the most valued assets in ensuring the future.   Women are enablers. Women are part of the solution to public security.  They must be offered the same opportunities as men to join the police or the armed forces.  Their economic role must also be calculated as part of any rebuilding activity since women are farmers, caregivers, health workers and, of course, heads of households preparing the next generation of any nation.

According to a new study by Valerie Hudson, Sex and World Peace, there is “a strong and highly significant link between state security and women’s security.”  This means that the single best predictor of a state’s level of peacefulness is not wealth, democracy, or identity; it is how well its women are treated.  She notes that democracies with high levels of violence against women also prove to be weak and unstable, a fact evident in countries like Bolivia and Guatemala, where femicide is among the highest in the world.   In places where the rule of law allows impunity in crimes against women, there will be higher tolerance for general violence and greater instability.  Progress for women will only occur when there is equal access to education, the right to political participation, the right to health care, pay equity, and equal opportunity in employment.  A society must embrace all its citizens, not half of the population.

Though women across the globe struggle to make strides toward peace, some examples of women making a difference to keep their communities safe and moving forward inspire hope that others can do the same.  In Honduras, a country with the world’s highest murder rate (82 per 100,000), women have worked tirelessly with police and local elected officials to promote alternative livelihoods for their grandsons.

Preventing young men and women from joining gangs that support local drug cartels has been effective as international donors cooperate with local organizations that develop alternative livelihood options.   It is the women who determine whether a community will be safe. There are many stories about police approaching women from troubled communities around San Pedro Sula to work together to gain access to the streets and work together in support of greater stability.  These mothers and grandmothers work with community leaders whose job-training centers provide opportunities for young men and women who otherwise might join criminal gangs.  Such partnerships recognize the role women play in making the streets of this Honduran city safe.

Working with women can also prevent violence and conflict.  In Jordan, young mothers have been part of a pre-school education program that trains them in how to help prepare their young children for school.  Early childhood education is mandatory in Jordan, but the reality of space in classrooms leaves many children behind and training mothers to help their young children lead more peaceful lives through home-pre-school activities can be powerful. These programs not only support early childhood education, but also help young boys respond to another ongoing problem: in-school provocation, by using words instead of physical violence to solve conflicts. This kind of work is especially important in a place like Jordan, since UNICEF reports that the country has one of the highest levels of school violence in the world.

In both cases, women have an important role in creating security for themselves and their communities.  This is what bringing local solutions to problems looks like when gender is considered an asset rather than a liability.  As we seek to inspire change this year, shifting our thinking away from victims will go a long way to inspire that change.