Categories: Features | Author: Madhawa Palihapitiya | Tags: Asia, Atrocities & Conflict Prevention, Civil Society | Publication: 2
Madhawa "Mads" Palihapitiya is the Associate Director of a research institute at the University of Massachusetts Boston. He is the former Director of Programs at the Foundation for Co-Existence in Sri Lanka where he engaged in high-risk mediation and violence prevention efforts, including co-creating a state-of-the-art conflict early warning and early response system during the civil war in Sri Lanka. 2

Soon after the signing of the 2002 Cease-Fire Agreement (CFA) to end a three-decade long civil war between the government of Sri Lanka and the Liberation Tigers of Tamil Eelam (LTTE), the Foundation for Co-Existence (FCE) implemented a citizen-based conflict early warning system for the volatile eastern province. The violence in this region started when 14 crosses in an eastern town were destroyed.  Religious violence soon became communal violence and spread throughout the three districts in that province. The violence there was so severe that it threatened to derail the entire peace process. Experts later realized that the violence could have been prevented and the threat to the CFA averted had the communities used an early warning system that systematically collected, verified, and conveyed early warning signs for preventive action.

The FCE early warning system strongly emphasized early intervention.  It was a unique symbiosis of an information center, an early response unit, and a group of highly motivated field staff (see Figure 1) and included youth leaders, journalists, local politicians, and community mobilizers. The information center collected daily reports of both conflicts and cooperation efforts from field staff, verified and coded the information, and transformed it into data that was entered into the FCE Early Warning (FCEWARN) database for analysis and forecasting.

The FCEWARN combined data analysis with field staff analysis and continuous field monitoring by the early response unit. This unit was pivotal in generating early warning and early response through continuous interaction with local actors. The unit monitored a broader range of indicators than the database. Some of them bordered on intelligence, such as information on rebel artillery positions and fuel collection for arson attacks.

Due to the fluid nature of the conflict in Sri Lanka, a considerable amount of information collected became inaccurate by the time it was written into reports for formal dissemination. This challenge was overcome through stringent verification processes. Multiple field staff or social networks observed the same situation, and warning signals sent to stakeholders through text messages or telephone calls were analyzed and disseminated as they were received.

For each early warning signal, the FCE selected appropriate response mechanisms; identified additional stakeholders to receive the warning; and chose the appropriate methods to communicate the warning (e.g., phone calls or text). Then, the FCE identified the human and material resources needed for response and developed timelines for intervention, which involved defining the desired early response outcomes and assessing the risk to staff and others. The FCE coordinated with other stakeholders, including bilateral and multilateral agencies (if present). The effectiveness of each response was evaluated to identify potential areas for improvement. The process concluded with staff debriefing and reflective practice (see Figure 2). 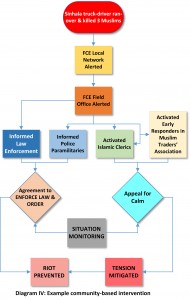 The FCE early warning system was successful in preventing conflict from intensifying in the area. For instance, FCE early interventions, including face-to-face negotiations, convinced military leaders to refrain from escalating communal violence and also quickly defused catalysts for communal violence, such as the LTTE seizure of tractors from Muslim cultivators. By working directly with the government, security forces, law enforcement, and community and religious leaders, FCE harnessed their combined capacities to prevent violence.

Initially, the interspersing of ethno-specific cities, towns, and villages (a Tamil village situated next to a Muslim village, which was next to a Sinhala village), particularly in the eastern province, proved challenging. During times of conflict, this interspersing made information collection and early action difficult as violence would erupt on the borders of these villages, making them inaccessible. Access roads would be cut off, and each group would patrol the boundaries of its own village. Over time, however, FCE acquired accurate information and credibility to mobilize interventions by hiring locals from these different villages. FCE explained the principles of early warning and violence prevention to these stakeholders and conducted trainings in negotiations theory and mediation skills. The formation of formal interethnic and/or interreligious committees, which we termed coexistence committees, assisted tremendously in this effort.

Unfortunately, as the war escalated, field monitoring became increasingly difficult to the detriment of community-based early warning and response. Entire communities were under threat as the two armies engaged in all-out war. Communities were displaced, disturbing the cohesion and integrity that is crucial for early warning and early action. Information collection became a highly sensitive issue as both warring parties considered it intelligence gathering. The safety of the field officers and community-based networks were at risk. Before the war escalated, warring parties were amenable to an extent to FCE’s activities to reduce violence, but once the war was in full swing, both sides cared more about military victory than about civilian casualties. As the fog of war set in, information became less reliable and preventive response thus diminished.

Such integrated technology in the hands of local actors, coupled with their determination to prevent violence, can carry citizen-based early warning to greater heights

Civil society actors implementing early warning systems during all-out war must find novel ways to collect and verify information while still maintaining the safety of their staff. If warring sides do not respond to early warnings and are perpetrators of violence, appropriate international actors need to be engaged to put pressure on local actors to protect civilians. Today, new technologies are advancing information collection, verification, and dissemination for citizen-based early warning. These include crowdsourcing, open-source spatial data platforms, technology for remote imaging, mobile technology, and big data analysis as well as low-tech methods like high-frequency radio. Such integrated technology in the hands of local actors, coupled with their determination to prevent violence, can carry citizen-based early warning to greater heights.