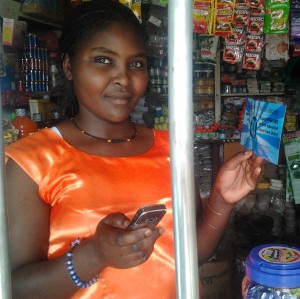 Many of the communities we work with are often marginalized and lacking government support. Feedback gathered from another survey of SNA-K subscribers indicated that, thanks to our texts messages, people felt greater attention was paid to the challenges faced by their communities. For example, subscribers commented on the successful impact of our messaging campaign warning youth about the consequences of their actions should they decide to participate in violence. One subscriber explained that he and his friends eventually refrained from taking part in looting that had begun after receiving a message that urged him to weigh the consequences. He was grateful that the message had prompted him to reconsider involving himself in violence.

Integrating new and innovative tools with local peacebuilding efforts also increased the visibility of local organizations. In every area where SNA-K went, we worked with local partners. Many of them said that people sought them out to thank them for the messages, and several were offered free rides on public transportation because they were recognized as “the peace people.”

Even as small-scale looting broke out in some areas, our messages of peace combined with the more visible presence of local peace actors provided a sense of security and social pressure for peace. One subscriber said, “The messages made me relax even in the midst of the violence that was happening although it wasn’t a lot of violence, but I still felt like someone was in control and watching and I knew things would be ok in the end after reading the message”, while another subscriber expressed that the messages “gave me the courage to preach peace.”

Finally, the messaging platform encouraged positive behavior and praised people for staying calm even when the situation became difficult. As one subscriber said, “the message was thanking me for being peaceful and that encouraged others to be peaceful as well, I felt so good when I got it I just had to share.”

In the end, it was Kenyans who chose peace. Even our messages, drafted with input from various groups including former participants in violence, drew upon reasons Kenyans already had for peace – economic and personal loss experienced in 2007-8; the desire to avoid manipulation by politics; the need for a bright future for their children and unity as Kenyans. Sisi ni Amani-Kenya’s initiative shows that equipping local peace activists in marginalized communities with appropriate tools to amplify their voices has the powerful potential to prevent violence and keep the peace.