Tim Martin is President of Diplomatic Counsel International Policy Consulting and a Strategic Partner of RESOLVE. Tim has thirty years of experience as a Canadian Diplomat including work at the Head of Mission level in Palestine, Africa, Latin America and Afghanistan. In 2004, Tim was Chairman of the Kimberley Process to ban conflict diamonds.

Diamonds and gold have an intensely emotional as well as monetary and industrial value. They symbolize love, romance, friendship, and far, far more. Human rights and environmental campaigners were onto something when they first targeted diamonds and then gold. The story of blood diamonds and conflict gold — minerals mined in war zones and sold to finance an insurgency, war effort, or warlord — threatened to change the emotional equation. The industry reaction was positive: the jewelry sector, along with key nongovernmental organizations (NGOs), helped design systems to promote conflict-free diamond supply chains. By the time the movie Blood Diamond hit theaters, the dire situation it depicted in Sierra Leone had improved dramatically.

Tantalum, tungsten, and tin are also highly-prized, integral in the manufacture of computers and cell phones. While electronics are important purchases, the emotional trans- action is not the same as with diamonds and gold. Yet whether we are buying a wedding ring or a cell phone, society wants to know that no harm was done and that our purchases contribute to peace and development. Investors and their shareholders feel much the same: they want to be sure that the money they raise on stock markets in New York, London, Toronto, and Sydney is not creating liabilities for human rights, or to the reputations of their companies.

The electronics industry, like the jewelry sector, moved quickly and effectively to support supply-chain transparency. In February 2014, Greenpeace campaigner Tom Dowdall spoke of “Apple’s increased transparency about its suppliers” as “a hallmark of Tim Cook’s leadership at the company.” The Enough Project, which supports peace and human rights in the Democratic Republic of Congo (DRC), had similar praise for Intel, HP, and Motorola Solutions.

We have now moved beyond transparency to a new era, of shared responsibility for ethical supply chains that have potentially significant implications for peace, development, and the environment. Downstream companies, those that use minerals in their products, have shifted from a reactive posture to recognition that their brands and products tell a story to consumers — including stories from upstream communities that provide the natural resources necessary for the manufacture of goods. The work of the World Gold Council on a conflict-free gold tool for its members is evidence of the support of upstream companies. This new orientation to supply chains contains seeds for development and peacebuilding because it ethically connects mining communities to the power of global brands. The greatest potential for positive, upstream impact comes when leadership is exerted across the total supply chain — miners, traders, processors, manufacturers, and consumer-facing brands — and includes the small-scale artisanal miner as well as global mining houses. Mining is but one example. The trend applies to other natural resource supply chains.

The time is ripe to focus on the role of the global extractive sector. Sector companies, development and peace NGOs, and development agencies are critical partners. The business case is supported by the growth of socially responsible investing, delays associated with social conflict at sites, the new wave of supply chain de-risking, and the commercial and development value of ore bodies in conflict-affected countries.

The sense today is one of growing confidence that industry, civil society, and government can partner to respond to resource challenges and conflicts. In the 1990s, producing oil in a conflict zone was considered by some to be a legitimate business decision. That view began to change when the Sudanese Presbyterian Church accused a company of genocide and took their grievances to court. The Global Mining Initiative, launched by the world’s major mining firms in the early 2000s, signaled a new orientation. Since then, a combination of public pressure and industry leadership has led to new commitments to global standards, greater transparency, and demonstrated development impact. Recent supply chain interventions supported by the electronics sectors and jewelers bring a new, positive dimension.

Today’s challenge may be greatest in the artisanal and small-scale mining (ASM) sector, in which miners — whether individually or in small groups or networks — work by hand. Small-scale mining can be dangerous but provides income for tens of millions around the world. It also is in some regions linked to conflict and rights abuses. Signs of progress are evident, however. 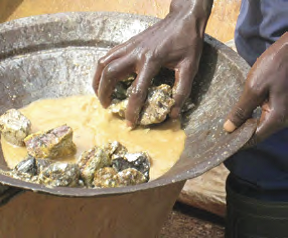 The Kimberley Process (KP) to ban conflict diamonds transformed the global trade by establishing criminal penalties for any international transactions in uncertified rough diamonds. The KP has limitations, however. Some question the self-policing aspects of its governance system. Human rights organizations have been critical of the KP certification of diamonds from Zimbabwe. Nevertheless, the KP had a positive impact. More recently, the UN has adopted guidelines for business and human rights. The instability in the DRC after the Rwandan genocide prompted the UN Security Council to examine the role of natural resources in conflict for the first time, but it had no real mechanisms to do anything about it.

To implement a provision of the Dodd-Frank Act of 2010, the Securities and Exchange Commission required listed companies to report on their use of conflict minerals from the DRC and bordering countries; first reports were due this past June. Over the last few years, the Organization for Economic Cooperation and Development (OECD) put forward guidelines on conflict-free due diligence for sensitive minerals, guidelines that are not restricted to the Central Africa region. The G8 ratified the conflict-free imperative for extractives with the 2013 G8 Lough Erne Declaration, which states that “minerals should be sourced legitimately, not plundered from conflict zones.”

Pathway to a Paradigm Shift

The rapid shift to shared responsibility for ethical natural resources has been remarkable. We have reached a tipping point, from whether to how questions—how best to initiate, organize, incentivize, and regulate.

The new paradigm has two elements: the transparent supply chain and the ethically mined and sourced mineral. In the upcoming phase, the larger mining companies and leaders in the ASM sector such as the Alliance for Responsible Mining and the Diamond Development Initiative become essential agents for transparency and development, in partnership with civil society and government, because it takes collaboration to build credible supply chains and promote in-region capacity building and development.

The World Bank reports some 100 million artisanal miners in about eighty countries contributing some 20 percent of the gold and diamond production worldwide as well as other strategic and high-value minerals. Development, like politics, can make strange bedfellows. New models are emerging for positive cohabitation by the large-scale mining sector, development agencies, human rights and development NGOs, and governments because all need solutions to the challenges and opportunities the ASM sector presents.

Proof of Concept for Resource Diplomacy

The most recent innovation in ethical supply chains is from the DRC, which only recently was ground zero for conflict minerals — the result of an intervention referred to as resource diplomacy. The premise of resource diplomacy is that voluntary, multi-sector intervention can play a unique role in building public-private partnerships to support in-region capacity building and bolster government processes. A new program, Solutions for Hope, is one example. (See Taking the Conflict Out of Conflict Minerals on page 22.) The program encourages supply-chain innovation and direct sourcing from conflict-free sites in countries of concern, mixing supply-chain transparency with development strategies linked to supply-chain incentives.

The challenge and opportunity extends to other natural resources. Although certification systems have become more sophisticated, too often, war is waged at the other, informal end of the supply chain. Today’s illegality and informality in many supply chains present a challenge. Responsible actors, whether they are trying to address illegal wood, fish, ivory or other commodities, need a starting point. As with the informal mining sector, resource diplomacy can be used to identify a critical starting point and the right group of partners.

The shift in how key actors have begun to organize to respond to this opportunity is encouraging. In the advocacy landscape, where civil society was once in an oppositional posture fighting severe pollution and other abuses at mine sites, the trend is toward development partnerships.

A new norm is fast unfolding in the extractive sector that will touch every link of the supply chain for sensitive minerals: mining investors, manufacturers, retailers, consumers, and governments will want to know that companies are clean of conflict both upstream and downstream. OECD guidance and other initiatives make this possible. This will extend to other commodities and products.

At the same time, the challenges are real. Entrenched conflicts will not disappear simply as a result of supply-chain due diligence and conflict-free sourcing pilots. Multi-sector partnerships are useful but not a panacea. The real challenge is how to scale up systems so that millions can participate. Thankfully, market-based models have been pioneered and all indicators are that a combination of business leadership, new multilateral standards, and civil society engagement will take it global.